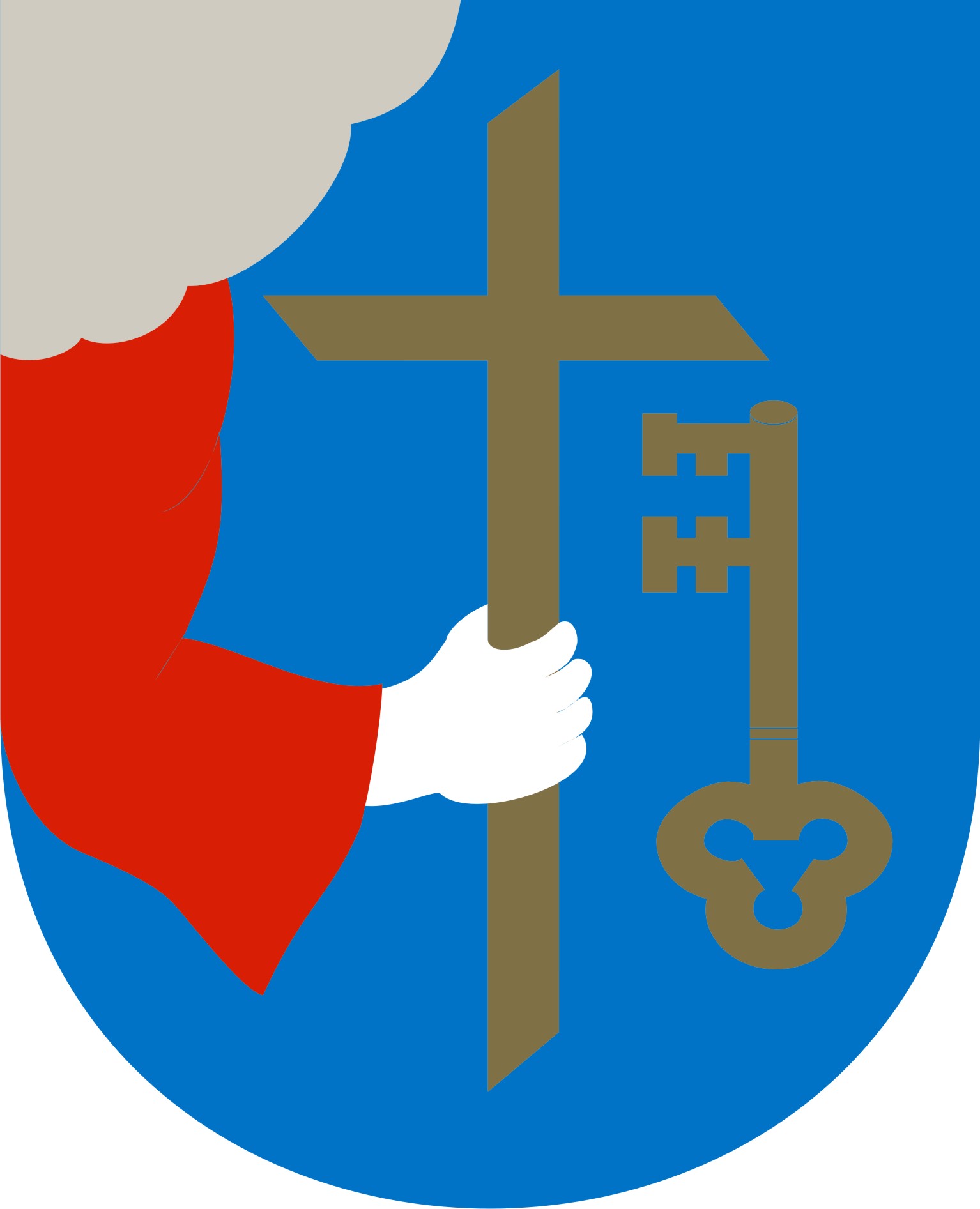 Like the other towns, the official symbols of Pärnu are its flag and coat of arms.

The coat of arms of Pärnu

The coat of arms of Pärnu depicts a hand proper within a maunche gules issuant from the cloud argent in the dexter chief of the azure shield round in base, maintaining a Latin cross or with cut limbs. There is a key or palewise next to the cross on the sinister side.

The oldest preserved seal of Pärnu from the year 1361 depicts the God's hand holding a burned cross and a key as the symbol of the town bylaws. The meaning of the Black Cross, known as a relic in the Middle Ages (probably the wooden altar cross that survived the fire of the Dome Church by a miracle) has been forgotten later and the Swedish changed the colours of the city that referred to the symbols of the Teutonic Order in 1651. Instead of the black cross on the silver background the golden cross on the blue background was taken into use.

The Russian rule changed the coat of arms of Pärnu (in 1728) into blue, white and red according to the colours of the imperial flag. However, the silver cross and key did not last for long, by 1760 the golden cross was back in use again.

The flag of Pärnu is blue, with a white cross.
The proportions of the flag (the width to the length) are 9:14
Standard dimensions: 1050 x 1630 mm. Description: a white
cross on the blue background

The quadratic flag of Pärnu with the heraldic cross was already described in the 17th century. Modern design of the flag of Pärnu (that was designed by a commission of the Union of Towns together with the other flags of Estonian towns) was approved by Pärnu Council in 1934 and taken into use the next year. The flag's design derives from the cross on the blue background seen on the town's coat of arms. To avoid the similarity to the Swedish flag the previous variant of the coat of arms i.e. with a silver cross is used.

The logo of Pärnu

The official logo of the City of Pärnu is a characteristic feature, just like a personal signature, which proudly promotes only the aspects that are seen as having value and potential for progress. The structure of the logo is universal, every citizen can write it by hand.

The word "Pärnu" written with a brush is a symbol as well as a name. The three dots above the letter "a" relate to the sun and the crown, and the blue and white on Pärnu's flag in the logo relate, in addition to consistency, to clean air and sea. The light brush strokes refer to the resort city's abundant vacationing and entertainment opportunities, and to its artistic and deep cultural traditions.